A 3-CD box set in the Historic Performances series at a special price: marvel at the great pianists Clara Haskil and Robert Casadesus playing piano concertos by Mozart and Beethoven, violinist Isaac Stern's accounts of Bartók and Tchaikovsky, and Georg Szell at the helm in symphonies by Brahms and Dvořák.

The booklets in three languages provide extensive background information on the artists and their relationship with the Internationale Musikfestwochen in Lucerne, and also features photos from the festival archive, published here for the first time. 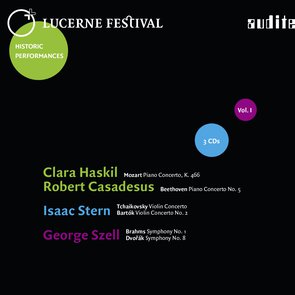