Claudio Abbado opened Lucerne’s 2013 Summer Festival — in what turned out to be his final season on the podium of the LUCERNE FESTIVAL ORCHESTRA — with a program including Johannes Brahms’s Tragic Overture, excerpts from Arnold Schoenberg’s Gurre-Lieder and Ludwig van Beethoven’s Eroica.

“All four movements of Beethoven’s E-flat major Symphony became an intense experience,” wrote the critic of the Neue Zürcher Zeitung, describing Abbado’s thrilling interpretation of the Eroica. “The concentration of expression that is so characteristic of Abbado was already clear from the varied attacks — differentiated with the greatest care — as well as from the precision of articulation and from the inner cantabile of the lines the strings played with little or even no vibrato. What resulted lent the opening movement a thoroughly revolutionary character, while the second movement Funeral March opened up  shocking new dimension of depth.” 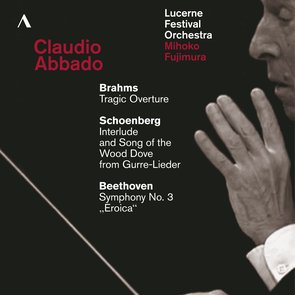