«A Russian Night»
Works by Tchaikovsky, Rachmaninov and Stravinsky

This is the first-ever concert DVD of Hélène Grimaud capturing her appearance with Claudio Abbado in a fascinating all-Russian concert programme recorded at LUCERNE FESTIVAL in Summer 2008.
The repertoire of the DVD throws light on various facets of Russian life and music. Two works – Tchaikovsky’s symphonic fantasia inspired by Shakespeare’s The Tempest and Stravinsky’s concert suite from the fairytale ballet The Firebird – depict the dramatic struggle between the forces of good and evil and the ultimate triumph of the former. And Hélène Grimaud is the soloist in a performance of one of the beloved classics of the late Romantic repertoire, Rachmaninoff’s Second Piano Concerto.
“Grimaud played with naturalness and chamber-musical spirit….a phenomenal orchestra inspired by its charismatic conductor.” – Neue Zürcher Zeitung 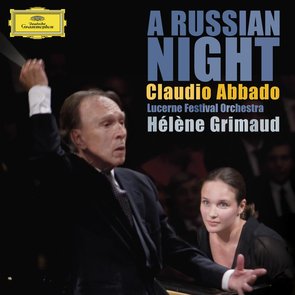