Two exceptional evenings of music making – and two sonic keepsakes of a splendid era. During the 2011 Summer Festival the unforgettable Claudio Abbado took to the podium before “his” LUCERNE FESTIVAL ORCHESTRA to conduct Mozart’s lively Haffner Symphony as well as selected concert arias by the composer with the soprano Christine Schäfer as soloist. The following year he led Beethoven’s incidental music to Egmont; with Juliane Banse undertaking the solo part and Bruno Ganz as the narrator. “It was thrilling how the great actor brought the words to life and endowed them with such keen significance; you could scarcely believe how effectively Beethoven’s incidental music to Goethe’s tragedy took on and intensified the emotions.” (Neue Zürcher Zeitung) 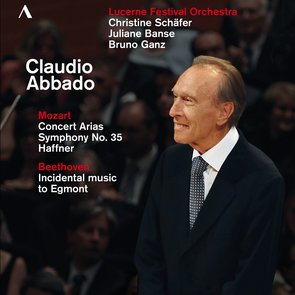