The LUCERNE FESTIVAL ACADEMY was founded in 2004 by Pierre Boulez in conjunction with the Festival’s executive director Michael Haefliger. Since then, some 130 highly gifted young musicians from all corners of the globe have gathered together every summer in Lucerne. Working together in daily rehearsals, workshops, and lessons, the participants are trained in basic skills for performing contemporary music. The teaching staff is made up of members of the Parisian Ensemble intercontemporain, one of the most celebrated ensembles in the field of modern music.
The 2010 Academy repertoire was recorded live during rehearsals and concerts of the Academy in summer 2010. The double CD is the only audio recording of the LUCERNE FESTIVAL ACADEMY Orchestra under the baton of renowned maestro Pierre Boulez – available worldwide.
In the sense of the LUCERNE FESTIVAL ACADEMY’s tradition to study contemporary scores and modern masterpieces of the early 20th century this audio recording offers Anton Webern’s Passacaglia for Orchestra, Op. 1 and Variations for Orchestra, Op. 30, Igor Stravinsky’s Le Chant du Rossignol and is rounded off by Gustav Mahler’s Sixth Symphony in A minor. 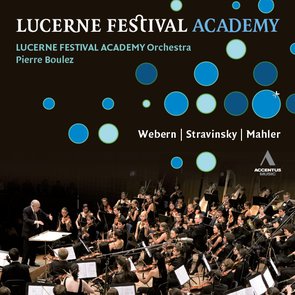