These are two pianistic pearls from the annals of Lucerne’s Festival history. The Hungarian Annie Fischer began performing in public while still a child; in 1933 she won the International Liszt Competition and continued to concertize throughout the war years all around the world. Sviatoslav Richter spoke of her “grand breath and genuine depth,” while András Schiff remarked that she had “very much influenced” him. Even so, Annie Fischer is too little known nowadays. This first-ever release of the live recurring of her only performance in Lucerne shows the pianist at the peak of her art. In 1960, together with Carlo Maria Giulini conducting the famous Philharmonia Orchestra, she gave an uncommonly poetic performance replete with chamber music-like sensitivity of Schumann’s Piano Concerto, one of her favorite pieces. Two years later, at the summit of his meteoric career, Leon Fleisher made his Lucerne debut – just a few months before he was diagnosed with the “focal dystonia” that made it impossible for him to use his right hand until recent years. With George Szell he performed Beethoven’s Second Piano Concerto – which the two had recorded in the studio the previous year – enthralling audiences with his bright, crystal-clear sound. 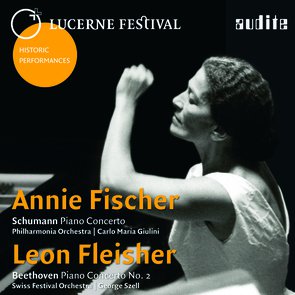